This past week the Orchid team participated in the first Virtual New York Blockchain Week. Amid unprecedented global conditions we saw and met with many promising people and projects. Here's a recap of what we have been up to:

The first event on the docket was Ethereal, which saw strong (virtual) attendance by developers, artists, entrepreneurs, and investors. Our CEO and co-founder Dr. Steven Waterhouse (Seven) elaborated on surveillance capitalism, and how to reclaim your privacy, especially during these unprecedented circumstances of a global pandemic lockdown.

Next up was the week's largest event, this year dubbed Consensus: Distributed. Orchid kicked off the event with a custom Foundations session on Monday, May 11th. The session began with an informative presentation by Seven about the challenges of the current digital privacy landscape, and how Orchid's incentivized peer-to-peer privacy network is making the Internet a freer and more open place. Later on, Orchid hosted an enlightening Q&A session led by CoinGecko Co-founder Bobby Ong, where Seven further discussed the "cat and mouse" dynamic that exists between privacy and surveillance tools. He highlighted the role Orchid plays in shifting that dynamic to return the control back to internet users. 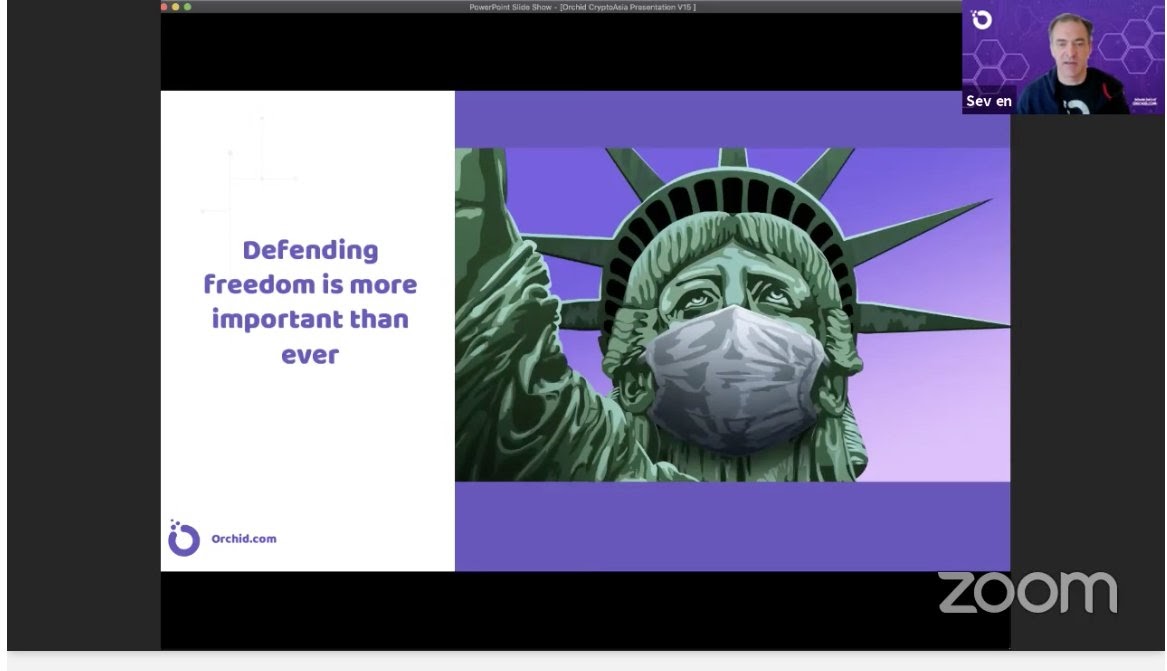 Following the Q&A,Orchid supporters Jehan Chu from Kenetic Capital and Matthew Roszak from Bloq participated in a roundtable discussion moderated by Amanda Cassatt. The participants delved into the purpose of VPNs and the next evolutionary stage of the Internet. Jehan spoke passionately about the everyday use case for VPN's, and Matthew expressed enthusiasm towards Orchid's product being live and ready to download today. Orchid's participation in Consensus continued with a discussion titled Weighing Privacy vs. the Public Good in which Seven served as a panelist. He was joined by former ACLU President and New York Law School Professor Nadine Strossen and CEO and Co-Founder of NYM Harry Halpin. It was exciting for Orchid to be a part of this important conversation around internet privacy before and after COVID-19. One hot topic discussed was the rise of coronavirus contact tracing apps, and how the general public should approach with caution given the liberties you give up when using. In Seven's words:

"One of the challenges is that even the decentralized design of Apple and Google, inspired by other people's work, is going to have a lot of resistance in the U.S. I don't think people will want to download anything, especially from someone like Google, if it is backing it. Apple is a little bit more trusted and I think it would be interesting to see, but I am not optimistic about the adoption of something like this." The Orchid team is excited to have been able to participate in these innovative -- and perhaps future-defining -- virtual conferences, and we look forward to seeing how the events space continues to evolve. Please follow us on Twitter @OrchidProtocol and sign up for our newsletter to stay up-to-date with our presence at upcoming events!